Byte The Book on The Future of Culture and Storytelling

Byte The Book hosted an event in June 2019 at the Groucho Club “What Does The Future of Culture and Storytelling Look Like?” The panel, hosted by Tortoise’s Michael Kowalski included Alex Holmes of Mostly Lit, Ines Bachor from the Frankfurt Book Fair and Pan Macmillan’s Technology director, James Luscombe.

The panel agree that predicting the future can be incredibly hard and not many would have predicted the recent spurt in popularity of audiobooks and podcasts. Hopefully they’ve still not reached their peak and there will be lots more opportunities to engage with authors, interviews etc. The panel agreed people really like the authenticity of podcasts.

On thoughts for what new tech will be coming soon:

James has been playing around with a voice app but it’s really hard to control and is still too early for the available technology. 4G made downloading and accessing content much quicker and easier and it’ll be interesting to see what 5G will bring…

Ines talked about cutting-edge areas for storytelling methods. Innovative story telling is coming with immersive content and AI eg Springer brought out an AI textbook but there’s still the question of how to monetise these kind of products.

Alex mentioned what some of the audience agreed with – the future is scary (he referred to Black Mirror! And that we don’t know what’s going to happen next.

The panel agreed there’s a huge amount of stories and content out there, which means that the really good things can get drowned out. As well as great books, there’s so much extra marketing content too – everyone is a storyteller, with social media we’re now living in a storyfied world.

An interesting question from the audience was to see how many people use Siri etc with only 25% of the room currently engaging. So we all love reading but it might be a while before we ask them for a bedtime story!

https://bytethebook.com/report of the event and pics

BytetheBook hosted a particularly good event called ‘How Do you Market Authors and their Books?’

Introduced by Justine Solomons and chaired by Hermione Ireland (Marketing Director at Little Brown Book Group @hermioneireland) the evening covered a really good range of questions for both authors and those working in marketing in publishing.

They had a range of experts including Julia Silk (Literary Agent at Kingsford and Campbell @juliasreading), Truda Spruyt (Director of PR agency Colman Getty @TrudaSpruyt) and Kit Caless (Author and Publisher at Influx Press @KitCaless) to ensure we heard all sides of the story!

Thanks to the panel and Justine, founder of @BytetheBook and look forward to the next event! 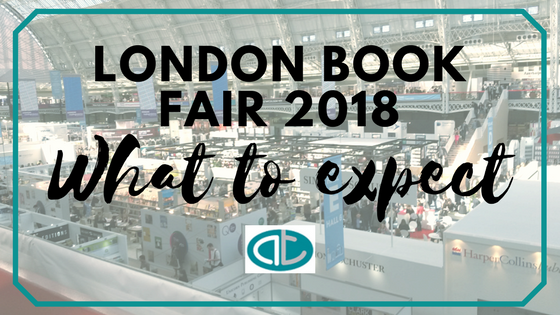 Here at Atwood Tate, we’re getting ready for the London Book Fair, which will be taking place on the 10-12th April at the Olympia exhibition centre in Hammersmith. We are busy booking in meetings with our wonderful clients; it’s a great opportunity for us to connect or reconnect with our contacts across the industry. It’s an important time of year for publishers, especially for rights and acquisitions departments, but for everyone else involved in the production and sale of books too. It may be held in London but it is a global affair, with stands from 1,000+ companies from 56 countries around the world and attendees from over 118 countries.

There are SO MANY interesting talks on, and while it’s impossible to go to them all, you should definitely look at the programme to see what you’re interested in going to so you can plan your time around them. Some of our must-sees are:

There are plenty of opportunities to network at the fair – at stands, in queues, sitting next to people in seminars… There are also networking events, and you are likely to see us hovering around – do say hello! We’ll be at:

This year there will be a Market Focus on the Baltic countries (Estonia, Latvia and Lithuania) as they celebrate a century since their independence. The aim of the Market Focus is to showcase books and the publishing trade in specific countries and regions around the world, and to highlight and encourage business opportunities globally.

This is really just an introduction to what will be happening at the London Book Fair this year. Whether this is your first time at the Fair or your thirtieth, we look forward to seeing you there! Get your ticket here. Follow #LBF18 on Twitter for more updates.

Byte the Book | Buzz Words: How Can You Build a Community Around Your Content

Last night I attended Byte the Book’s event on marketing and building a community around your content, sponsored by Bookswarm. As Atwood Tate’s Social Media Coordinator, I found the talk from industry leaders and influencers really interesting.

We gathered in the chapel at the House of St Barnabas (a not-for-profit private members’ club working against homelessness), which was a beautiful if unconventional venue. The wine I’d bought not long before had to be quickly finished off as we couldn’t bring alcohol into the chapel. As I sat on a hard wooden pew, I drafted a tweet with an image of the chapel, which I immediately had to delete upon being told the crucifix hanging over the alter was in fact copyrighted.

At any other panel talk, the audience being glued to their phones throughout would be considered rude. At a digital marketing discussion, it’s encouraged, with live updates from the #BytetheBook hashtag projected on to the screen behind the speakers.

Digital Marketing Tips from the Panellists

Lysanne Currie, a journalist and digital strategist, chaired the discussion. She began by asking Laura Lindsay, Director of Global Communications at Lonely Planet, about the community of travellers Lonely Planet has built online and offline. Lindsay recounts how Lonely Planet started its online community in the 1990s by sharing letters from their readers. They were one of the first brands on Twitter, and built their following by sharing content from their community of travellers, not just sharing marketing materials. Building an online community, she says, is no different to building a ‘real world’ community.

Children’s author Piers Torday notes the barriers to connecting directly with readers online when those readers are children, so he embeds himself in distinct communities of parents, librarians and teachers. These are the gatekeepers and the people who buy children’s books. He also discusses the differences between content on different platforms. Twitter, he says, is great for conversations. Instagram is best for curated storytelling.

Leena Normington, YouTuber and Social Media Producer at Vintage Books, advises the audience to choose what platform(s) work for you, and not worry about using every platform. She notes the different demographics engaging with different media – for example podcasts tend to have a slightly older and more male audience than YouTube videos. She also emphasises treating your online audience as real people, not only as viewers or subscribers.

The panellists agree that the key to a great social media presence is to be consistent and to be genuine. Have a schedule for uploading content and show who you are as a person, rather than just marketing your book. Try new things and experiment, see what works for you and it’s okay to stop if it’s not working.

Byte the Book: Publishing Networking at the Groucho Club

Get tips from industry professionals and have the opportunity to network with authors, agents, publishers and suppliers to the publishing industry.

This event will be at the Groucho Club. Byte the Book and Groucho members get in free. Non-member tickets are £20. If you are keen to join Byte the Book please sign up here.

Members and non-members need to sign up for a ticket to reserve their place.

Are you attending this event? Let us know!

Byte the Book: How is Technology Revolutionising Distribution in Publishing?

Byte the Book are hosting a new event about technology and how it is revolutionising distribution in publishing! Take a look here for more details!

Speakers: Byte the Book’s Justine Solomons is going to chair and her speakers will be: Andrew Bromley (Ingram), Orna Ross (Alliance of Independent Authors) and Tereze Brickmane (Tales on Moon Lane).

Topic:  How is Technology Revolutionising Distribution in Publishing? How can you get your books into as many places as possible and how can technology help authors, booksellers and publishers reach a wider audience?

Tickets: Entrance is free to members of Byte of the Book and members of The Groucho Club. It’s £20 plus booking fee for everyone else. Tickets can be booked here.